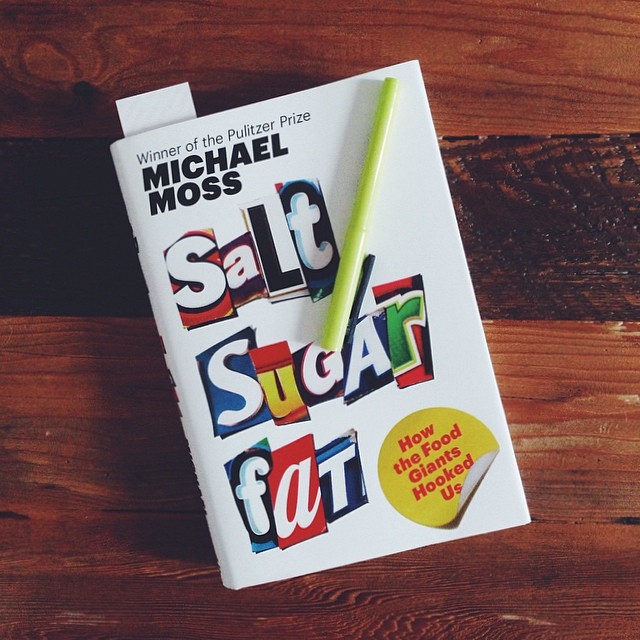 Why Salt Sugar Fat is a Must-Read

Oh, this book, this book. I’m thinking if you’re reading here, you’re probably already familiar with Michael Moss’s Salt Sugar Fat at least in title. If not, it’s a fascinating read on how our current processed, fast-food, snacking-all-the-time culture came to be. The book details the driving forces behind convenience foods (such as more women joining the workforce outside of the home and having less time for meal prep, men working longer hours, etc.), but it also talks at length about the brilliant marketing efforts of big food companies, sometimes in partnership with the government, in creating the desire for this way of eating.

Salt Sugar Fat is one of those books that has the potential to completely rock the way you think about food.

I’ve read it twice now, and I feel like I could read it a third time and still learn more. It’s presented in the form of stories – how instant pudding, Lunchables, and double-stuffed chocolate-covered Oreos, for example, came to exist over time. Moss doesn’t vilify the food giants or the government, but instead provides matter-of-fact histories and interviews with those who were at the center of it: the food scientists, the salespeople, the advertising executives, and explains the impact of what was happening in the marketplace. Now, that’s certainly not to say that these processed foods began as sunshine and good intent. They didn’t. These are businesses with one main and often only objective: to maximize profit. And so that’s where the extreme amounts of salt, sugar, and fat come into play, amounts that you would never add to real food made in your own kitchen.

Because this isn’t real food – these are products that come out of a lab, having gone through rigorous testing to create foods that are spot-on in terms of bliss point. Foods that operate similarly to drugs in creating pleasure, withdrawals, and intense cravings for more.

For years, I had wondered why I could rarely stop eating that bag of Lay’s baked potato chips or those Famous Amos cookies, and it made me not only feel unsatisfied and lethargic, but I also felt guilty – like I didn’t have the self-control I should have had to be able to stop at the serving size on the package. And now I understand that these processed foods are engineered to require an absolutely heroic effort to eat the serving size, and that this serving size is really just a marketing ploy. It’s there so the calorie count and fat grams don’t make us balk when we read the label (if we read it at all), but the food companies know that we will most certainly eat the entire bag in one or two sittings. They’ve designed the food to be this way. It’s why cheese puffs (an old favorite of mine as a kid) are so loaded with salt and fat (and sugar!) and disappear on the tongue almost immediately, leaving us reaching for another and another and another.

There were so many of these lightbulb moments in Salt Sugar Fat, too many for me to cover in a single post. However, I do want to share some of the excepts that had a profound impact on my understanding of the processed food industry:

I will leave you with one of my favorite quotes, which was appropriately stated as the last couple of lines in the epilogue:

“They may have salt, sugar, and fat on their side, but we, ultimately, have the power to make choices. After all, we decide what we buy. We decide how much we eat.”

I’ve always thought of myself as a proponent of moderation, but when it comes to processed food, moderation is a grueling, uphill battle. More and more, I think for myself (and perhaps many of you too), I’m likely better off avoiding it altogether. It’s just not worth the energy suck.

What do you think? Have you read Salt Sugar Fat?

Disclosure: There are Amazon affiliate links in this post.